For the last three years or so I’ve had a Rogue R4 power rack in my garage gym (many of you have no doubt seen my glowing review for the R4), and in that time I have had not one issue, problem, or complaint with or about the R4. It has served me well. I even purchased many accessories for it; all of which work wonderfully and get used regularly. All that being said, despite my respect for the R4, I’ve replaced it with the smaller Rogue R3 Power Rack.

The R4 is a pretty big power rack at about 4½-feet square, and it’s about twice as deep as I needed (especially since I use spotter arms.) I also anchored it down further away from the wall than I should have; pretty bad planning on my part. Anyway to make a long story short, by not only moving, but also downsizing the R4 power rack to an R3, I was able to reclaim dozens of square feet of my garage. 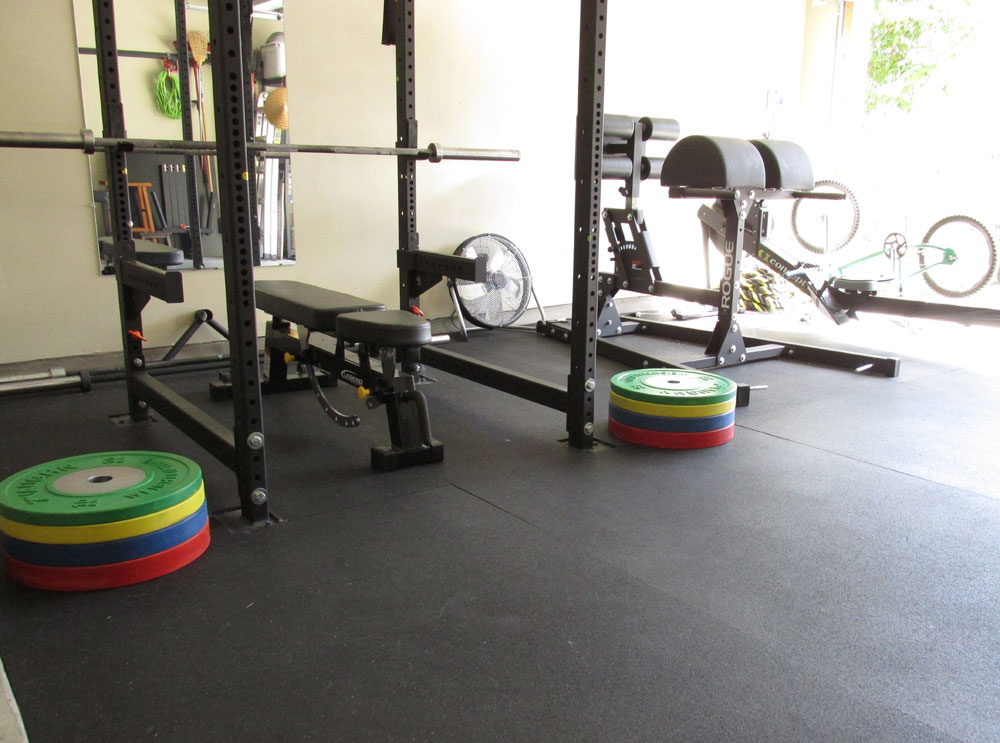 My old Rogue R-4 set-up. Between the gap from wall to rack, and twice the inside rack space that I actually needed, there was lots of wasted space going on here.

Thankfully Rogue racks are modular, so I only needed to buy a couple of pieces to convert my existing R-4 to an R-3. Technically, all I needed was two pairs of Rogue R-3 24″ cross-members, but since I intended to set up the R-3 as a half rack, I also purchased a couple pairs of plate horns for weight storage. I already had three different pull-up bars (the single bar & skinny/fat bar come standard with the R-4, and I bought the multi-grip bar as an add-on), so there was nothing else to buy.

On the left are the 24″ cross-members from the Bolt-Together R3. They were about $80 per pair. I also bought some plate storage horns (right) for about $50 per pair. It was a very simple transition.

As you probably well know, half racks are basically squat stands with a pair of rear uprights for plate storage. Like a squat stand, you work out in front of the rack (or outside of it). Half racks offer just about all the benefits of a full-size rack like the R-6 (plate storage, pull-up, stability, accessory options), but for a lot less cash and by using a hell of a lot less space. For me, the downside of a standard half rack is that they have long, protruding legs. Since my goal was to reclaim space, I didn’t want those long legs. 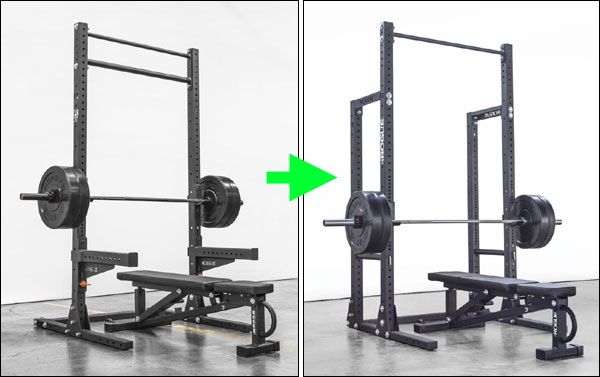 I borrowed this picture from my power rack guide to show you the feet that half racks and squat stands have. You don’t have to anchor these types of racks, but I was okay with anchoring if it meant no long legs. Having said that, if I was starting from nothing (no R4), I would just have bought the HR-2 (right image.)

In order to safely “convert” the R3 into a half rack, the unit absolutely had to be anchored to the foundation in order to prevent tipping. I used three concrete anchors per rear leg, and two anchors per front leg; for a total of 10. Having plate storage on the rear uprights also contributes to the racks stability by acting as a counter-weight on the rare occasion I fail a rep and have to set a loaded bar on the front-facing spotters (although this is obviously not a suitable substitute for anchoring.) 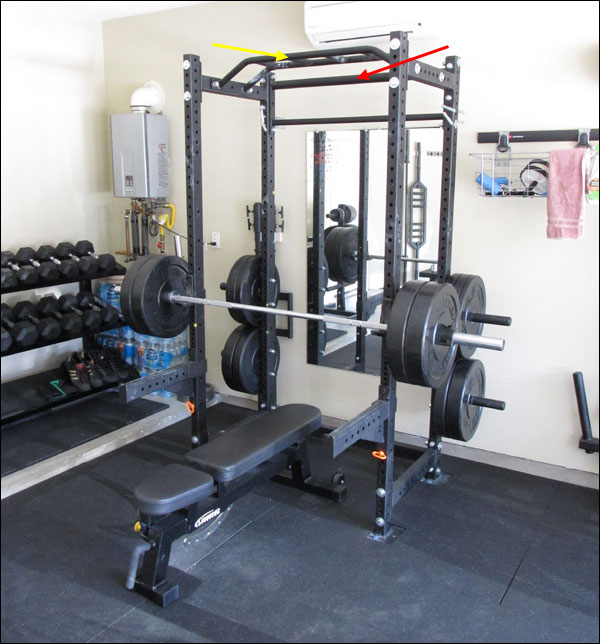 R3 Half Rack. I already had the skinny/fat pull-up bar that comes standard with the R3 and R4 (red), but I installed it vertically for stability rather than chin and pull-ups. I use the multi-grip bar (yellow) for those. 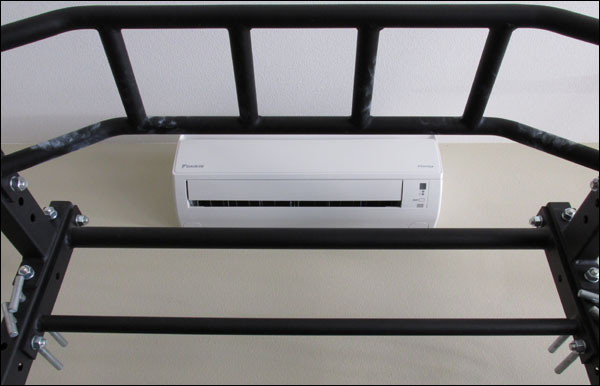 Here is a better shot of how I installed the pull-up bars. The fat/skinny bar is vertical just like it is on the R4, only I did it this way for stabilization. With the R3, that fat/skinny bar would normally be installed where I currently have the multi-grip bar.

First of all, just about everything that I had to say about the R-4 in my that review applies to the R-3 as well. Quality of construction is the same, accessories and add-ons are the same, and both have the amazing Westside hole spacing. Both racks are awesome, and there are so many small things that Rogue does better than they probably have to; things you would not even know to look for in many cases.

For instance, holes are laser cut rather than drilled, and they always line up; the welds are clean and look professional; and sharp edges and flashing is removed from every piece of fabricated steel before powder coating is applied. I hate sounding like a Rogue fanboy, but if there is one thing they can do it’s build great, high quality racks and rigs (I’ve been around some imported knock-off racks, and you wouldn’t believe what passes for a finished product out there.)

When looking over my R-4 review, the only thing that I notice that wouldn’t really apply here would be the strong recommendation I made regarding replacing the pin-and-pipe safeties with spotter arms. I can see the pin-and-pipes being much simpler to use on a rack with 24″ between uprights instead of twice that, making that upgrade far less critical. Try the pin and pipes before you order arms; you may not feel as compelled to upgrade to arms with the R3 as you would on the R-4.

In the end, as much as I like the R4, I prefer the R3 for my situation. I have access to all the same exercises and all the same accessories, but the rack takes up half as much space as the R4 did. Not only that, I now have more plate storage, and the plates are inches from the bar instead of across the garage on a plate tree. This doesn’t change how I feel about the R4 or the R6 though; I think all three of them have their place. The entire Rogue Infinity line is by far one of best priced, best built, and most versatile power racks on the market. 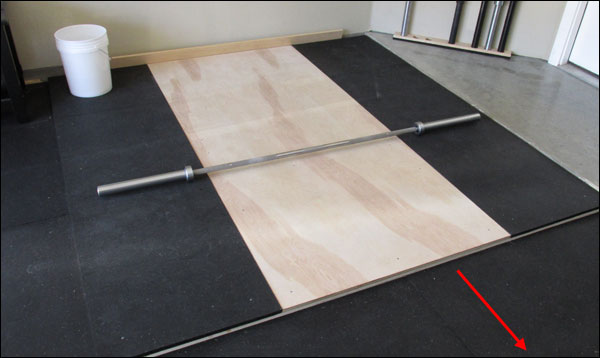 This is my 8’x8′ Olympic platform. It’s not stained yet, but it’s completely functional. If you follow that arrow about seven feet, you’d hit the front of the new R3 (just to give you an idea of layout.) Lot’s of space.

Rogue R-3 Options (there are many!)

Leave it to Rogue to have a power rack for any situation. Keep in mind, most of the same variations are also available for the R4 and R6. In other words, Rogue has a ton of racks.

The “standard” R3 is completely welded except for the fat/skinny pull-up bar. It’s 90″ high, 30″ deep (24″ between uprights front-to-back), and has a total footprint (the feet poke out for anchoring) of 53″ x 34″. The rack comes standard with a pair of J-cups, and the pin-and-pipe safety system.

You can also order the standard R3 as a “shorty” version; it’s 84″ tall versus 90″. My guess is that this option exists for those of you with basement gyms. Either version is $695 before any accessories or add-ons.

The bolt-together version of the R3 has cross-members that aren’t welded. There are two benefits to the bolt-together; it’ll fit into tighter spaces (doorways, stairs, etc) for assembly, and it can be shipped to APO addresses. This version of the R3 is $725, and a slightly deeper 30″ (vs 24″) version can be had for $20 more. The bolt-together R3 is the same rack as the standard R3, and it has all the same features (safeties, J-cups, pull-up bar), but it obviously comes in more pieces so requires like five more minutes to assemble.

There is also the RE-3 Power Rack, which is more or less the economical 2″x2″ alternative to the R3. The size and features are mostly the same, but the price is lower by over $100. Other than the fact that it looks wimpy (it’s not really wimpy, just looks it), the biggest down-side to the RE-3 is that it lacks the Westside hole spacing in the bench region. Westside spacing is amazing to have, and it’s hard to go back once you get used to it. Also, the safeties are not included in the price, and the J-cups have no protective plastic. I don’t think this rack is worth it; stick with the Infinity line.

I get asked from time-to-time about the Infinity series vs. the Monster/Monster Lite series. That is, what justification is there to own a beefy, 3″x3″ rack like the RML-3 rather than the standard 2″x3″. I am of the opinion that the 11-gauge, 2″x3″ configuration of the Infinity series is just perfect for a garage gym, and even sturdy enough to be used commercially. 3″x3″ is a little bit (a lot, really) of overkill in a home, especially when you get into the thicker 7-gauge metal. It’s a power rack, not a skyscraper.

So unless you plan on driving your truck into your power rack at 60 mph, I think you’ll be fine with 2″x3″. Having said that, Monster racks looks super cool and beefy. If you’re flush with cash, knock yourself out and buy some Monster gear. Be warned, the accessories cost more as well.

I did my conversion the way I did because it was cheaper than buying a whole new rack (by a lot.) If you want a half rack, I suggest just buying a half rack, not a power rack like I did. As I previously mentioned, if I did not already own the R4 to convert, I would have probably just bought the Rogue HR-2 Half Rack and called it a day. The HR-2 is a few bucks less than the Rogue R3, and it’s even a Monster Lite (3″x3″) rather than an Infinity. It too has the Westside hole spacing and chin bar, but it also has plenty of space for plate storage horns. 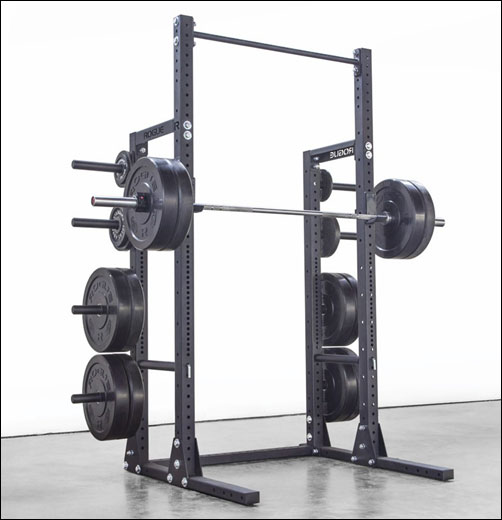 The Rogue HR-2 Half Rack – $655 before upgrades and accessories (spotters/safeties not included.)

One of the drawbacks of the HR-2 vs the full racks is that you can’t use the multi-grip pull-up bar. I’m sure that’s not a deal breaker for most people, but it’s worth mentioning. You don’t get any safety system included either; spotter arms are an add-on. There are pin/pipe safeties for the HR-2, but I can’t understand why anyone would buy a half rack and then work out inside that little bit of space rather than use those rear uprights for storage. To each his own though!

There are other half racks out there, but I don’t think I’d even stray from Rogue when it comes to power racks and squat stands. Knowing what I know about how they are made and the fact that they are modular makes them an easy front-runner. So again, if you’re in the market, take a look at the Rogue line-up before you make a decision.