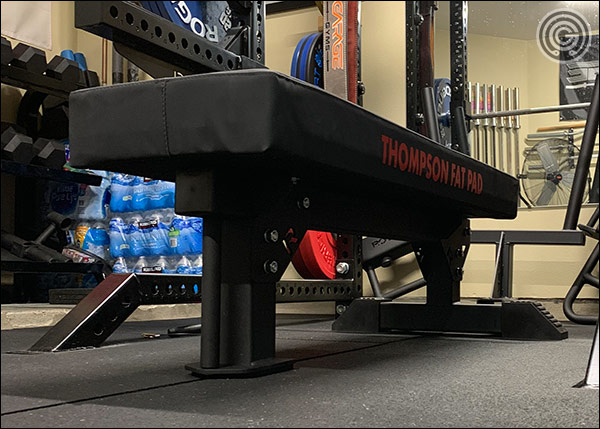 The newly redesigned Rogue Monster Utility Bench is finally here. That’s right; the beefiest, coolest looking utility bench to ever exist is no longer the most unwieldy bench around. The new 2.0 Monster Frame now has wheels and a handle, a tripod frame that makes setting of your feet less of an ordeal, and yes, it’s still available in the same six custom configurations.

In this review I will discuss the features, pros, and cons of the Monster Utility Bench 2.0 just as I normally would in a bench review. I will also give extra attention to how the Monster 2.0 compares to the Rep Fitness FB-5000; that ever-so-popular, extremely affordable, Fat Pad-compatible utility bench that beat the Monster 2.0 to market by over a year – the bench that has hundreds of 5-star reviews and no doubt finds a home in thousands of garage gyms.

See my review of the Thompson Fat Pad. 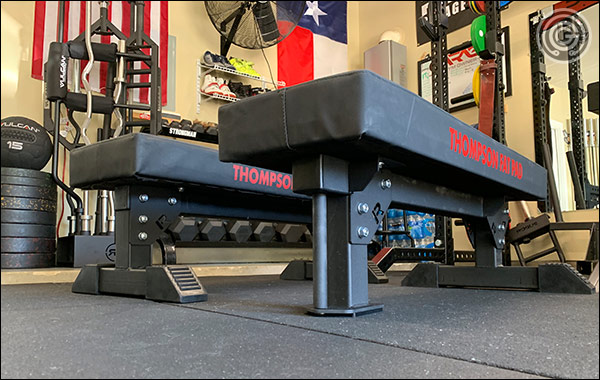 I bought the original Monster Utility Bench long before you could order the Shorty version of the frame; back when,  if you wanted the Monster frame with a Thompson Fat Pad, you had to give Rogue some extra cash and some extra time to chop down the legs down to a more reasonable height. That is unless you were fine with benching from a pad that sat about 20″ off the ground (vs the normal 17″ or 17.5″.)

It was expensive; especially since I had already purchased the Thompson Fat Pad by itself; but I was pretty stoked about having a Monster Bench with Fat Pad. At the time there were no regrets. It was hard to do much better in terms of a flat, garage gym bench.

I loved that bench, but it became obvious early on that it was not a very user-friendly bench. At over 80-lb, 50″ in length, 24″ wide, and having no wheels or handle for rolling it around, it was a total pain in the ass to move around the gym. Even dragging it was an ordeal. Those giant rubber feet are fantastic from a stability point of view, but they made dragging the unit across rubber flooring a workout of its own.

I’ll get into this more later in the review, but when Rep Fitness starting offering the FB-5000 for half of what the Monster frame cost (less than half at first), I switched frames. I can’t say I was happy about that switch considering how deeply invested I was in the Rogue, but the idea of a lighter, Thompson-compatible frame with wheels and a handle was just too sweet to ignore. My Monster Utility Bench frame went into storage and the Thompson Fat Pad got installed on the Rep frame. 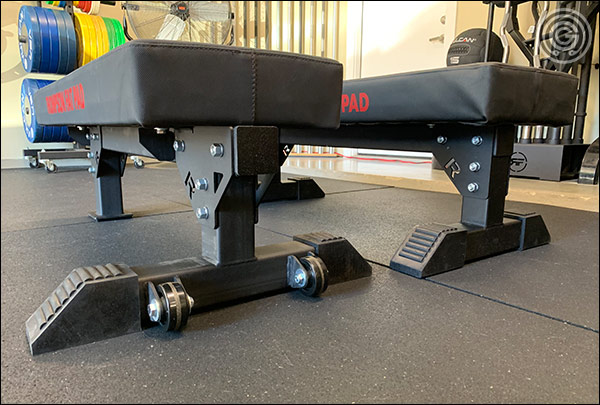 The 2.0 is also easier to store, as it is designed to be stood on its end when not in use. The original Monster Bench could also be stored upright, but not only would it sit and an obvious angle, but the weight of the bench was on the end of your $155 Thompson Fat Pad; squish-ing it over time.

All of the amazing things about the original Monster Bench remain the same.  The frame is still made from 11-gauge, 3″x3″ steel, the hardware is still beefier than it needs to be, and it still looks as cool as it ever did. All six of the bench / pad configurations are still available as well. You have your choice of a basic flat pad, Thompson Fat Pad, and Rogue’s Comp Pad. 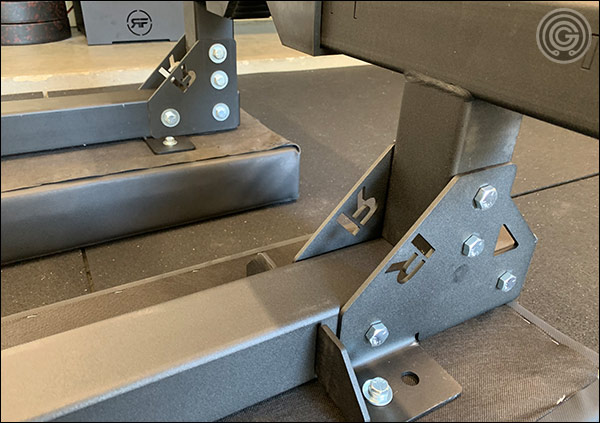 The price is up $10 and shipping still adds a pretty penny to the total cost of this beast, but it is definitely a better buy than it was previously.

Does that sound like a short and sweet review? Don’t worry, it’s not over. Keep reading for a comparison with the FB-5000 that will go into many more details about the new Monster 2.0. Following that is a TL;DR pros and cons list and summary. 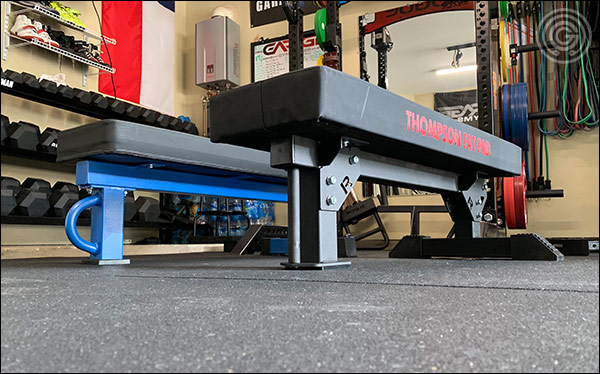 Where to even begin!  Let’s just start with a comparison chart, then I’ll get into more detail where necessary.

Many things are the same, and are not listed in the above chart. This includes the use of an 11-gauge, 3″x3″ steel on a tripod frame, non-slip rubber feet, wheels and handle for mobility around the gym, and the use of grippy vinyl on the bench pad. These two benches are quite similar. Extremely similar.

So how are they different?

Rogue has a more elaborate and over-engineered frame. It’s the same basic frame design; a horizontal beam supported by a single-column foot in the front and a standard set of legs in the rear. What’s different is that Rogue uses 3/8″ thick gussets with four massive bolts on each leg post, while Rep uses backing plates with two large bolts per post. Does it matter? I dare say it won’t ever matter, but the Rogue is technically a beefier design, and it does kind of look cooler. 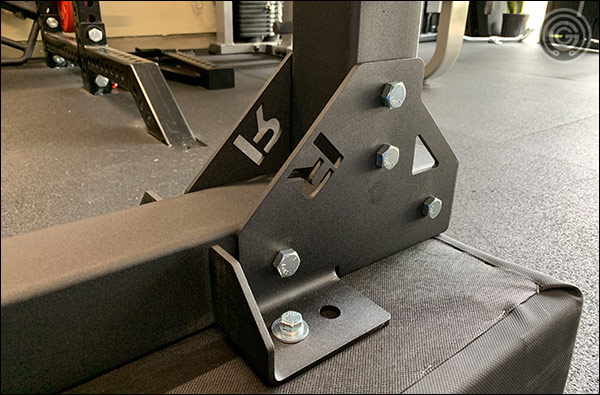 That said, The Rep FB-5000 has more pad support. It offers support not only on both ends of the pad, but in the middle as well. The Rogue covers more surface area on the ends but has no support in the middle. This too probably won’t ever impact anything, but if I’m going to nitpick the frame at all, I might as well be thorough about it. 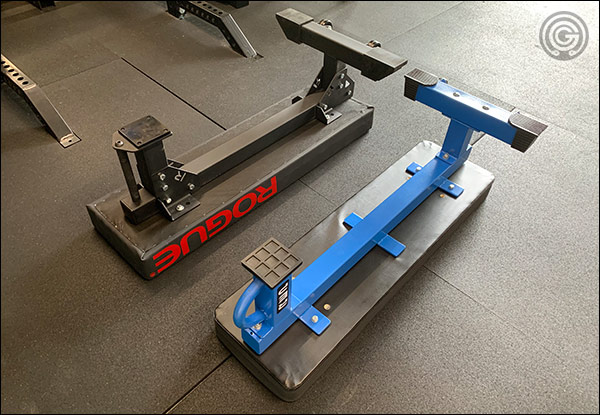 The Rogue Monster 2.0 has a significantly wider stance in the rear, which you’d think would make the bench more stable, but the difference is negligible.  Any instability you experience on either of these benches is going to come from the front foot, not the rear. They are tripod benches after all. 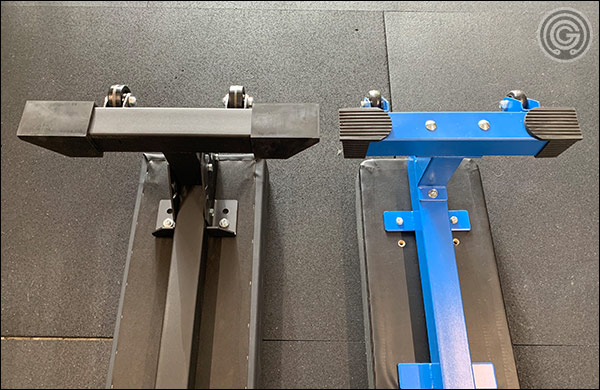 There are slight differences in the pad dimensions from one manufacturer to the other.  Rep has a 48.5″ x 14″ x 4″ Fat Pad (I guess I should be saying ‘Wide Pad’), while the Thompson is 50″ x 14.5″ x 4.5″. It’s a subtle difference, obviously, but when interchanged on these two frames you can alter the height by half an inch (though this really only tends to happen on a Rep FB-5000, as buying a Wide Pad for a Rogue frame probably hasn’t been done much.) 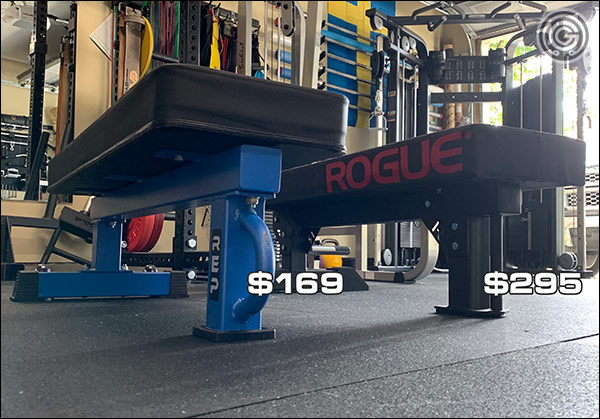 For frames this similar it is hard to ignore this discrepancy in price. It’s huge. Is the Rogue a nicer bench? Yes. Is the Thompson Fat Pad superior to the Rep Wide Pad? Slightly. Should you pay $126 more before shipping for the Rogue Monster with a Thompson Fat Pad?

If you are on a budget of any kind, then no, because honestly there is not a $125 difference between these two tripod benches no matter how you mix and match frames and pads. I’ve been using the Rep FB-5000 for a long time now without a single issue, and I am not alone on that. I have never thought to myself, “boy if only someone else would improve upon this bench ever-so-slightly and charge more for it,” and I’ll bet the majority of you would agree.

Having said all that, I know how it is. Many of us just have to have the nicest option, even if that option costs more cash. I mean really, at the end of the day, a $125 price difference on a bench that’ll probably be the last bench you buy is nothing compared to the premiums we pay on a power rack, power bars, our specialty bars, and so forth. Many of you have $2000 mega racks and $700 bars when you could be getting the same quality training sessions on a rack that cost a grand and a $300 Ohio Power Bar.

In other words, if you have no budgetary concerns and you just want the best (even if “best” is only a marginal improvement), buy yourself a Rogue Monster Bench 2.0 with the Donnie Thompson Fat Pad and be done with it, probably forever. 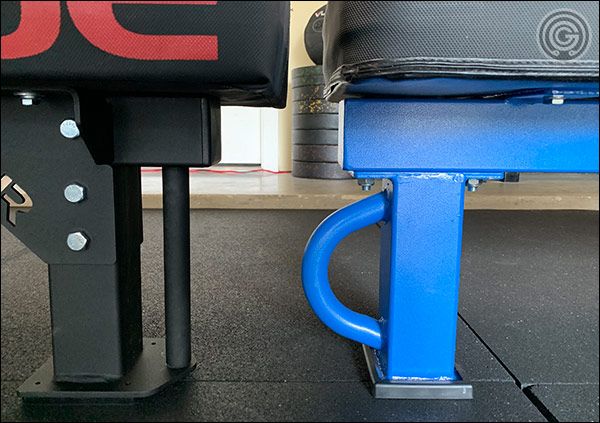 The Rogue Monster Utility Bench 2.0 is overbuilt, completely functional, and absolutely bad ass looking. It is clearly an improvement over its predecessor. There’s a nice variety in build options, all of the pads are super high-quality, the dimensions are perfect, and I’d wager the frame is indestructible. This is a great utility bench.

I docked a half a star from features because the handle is in an awful position when one of the 50″ pads is installed. It is very hard to reach because you have to get your arm not only down, but under the bench in order to pick it up. See the image above.

Finally, value isn’t excellent at $350 shipped. This is an American-made product, and to this day nobody has made a fat pad as nice as the Thompson, but when similar benches sell for close to half as much price is definitely going to be a factor for most people.

If you already own a bench you’re happy with, like the FB-5000 or even the original Monster Bench, I’m not going to suggest you run out and drop $350 for a minor upgrade. If you’re in the market for your first bench then yes, definitely consider the Monster 2.0. It’ll certainly be the last bench you ever buy. I certainly plan to keep mine!