Anyone who owns a bare steel bar probably already knows that it takes regular oilings and brushing to keep these raw bars free of rust. We all know it, but not everyone does it; or at least not as often as they should.

If you are one who tends to neglect this minor chore long enough for oxidation to take over your bar, this article will show you a quick, easy way to deal with that rust and get your bar looking new again, and with very minimal effort.

I myself am generally really good about maintaining my barbells, but I have multiple bare bars to deal with, and two of them (Ohio Power Bar and Ohio Deadlift Bar) are used quite often and by multiple people. They not only get oiled less often because nobody wants to touch an oily bar, but the frequency that they are used and sweated on just increases the oxidation rate.

In any case, the Ohio Power Bar is the bar I chose to clean for this article, and I’m hoping to make a video using the Ohio Deadlift Bar.

As you can see, this bar was getting pretty rusty. Honestly I don’t know how the sleeves got so out of control. I need to figure out who is putting their hands all over the sleeves and put a stop to that. Sleeves should not rust to this extent.

Now sure, you could take a normal, handheld wire brush like most folks tend to recommend to a mess like this, but you’ll be scrubbing that bar for hours. Or you can spend about $5 on a wonderful drill attachment and be done in 20-30 minutes. Yes the entire bar!

I got the brush pictured below at Home Depot, and I’m sure Lowes sells the same thing as well. You can also pick one up on Amazon without leaving the house. Regardless of where you get it, this wire wheel and some WD-40 is by far the fastest way to clean up a bar. 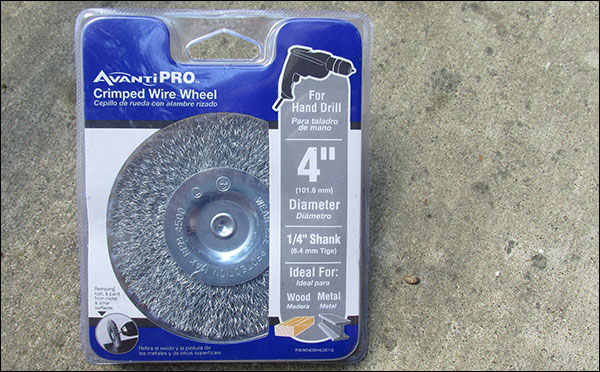 There isn’t much to explain in terms of what to do with it; it’s pretty self-explanatory. Put it in your drill, grab the safety goggles and your WD-40 (it’s better for removing rust than 3-in-1 oil), spray down the bar and go to town.

Of course you’ll want some shop rags and probably an old towel to catch the overspray that would otherwise end up on your garage floor or driveway, and ideally something to elevate the bar above the towel so you aren’t catching it with the wire, but other than that it’s pretty simple. Spray, brush, wipe down, and repeat on the stubborn areas. 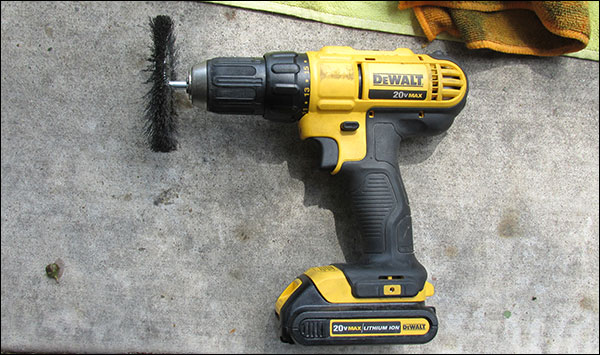 This wire wheel destroys rust, but using it runs through a 20v battery pretty fast. Use a corded drill if you have one. I had to switch after burning through two 20v batteries in 10 minutes.

When it’s all said and done and your bar looks new again, it’s as good a time as any to put a protective coat of 3-in-1 on the bar.

The lighting wasn’t great because of the trees. Click to enlarge.

Now I won’t say it looks like it just came out of the shipping tube but still it looks pretty damn good; certainly nothing like it did before cleaning it! Raw barbell ownership is much less of a hassle when you have a decent power drill and a $5 crimped wire wheel (which incidentally lasts for a great many cleanings by the way.)

Here’s another before and after picture from a different angle.

Rusty Ohio Power Bar before and after. Click to enlarge 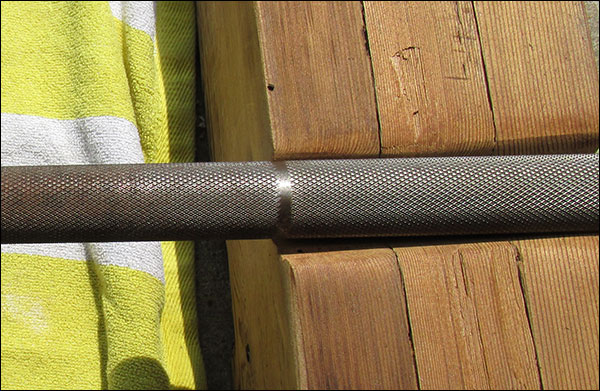 Simple 2″x6″ cedar blocks screwed together with a notch for supporting the barbell.

I realize that this isn’t groundbreaking information, but I know for a fact some of you are out there with a handheld wire brush just wasting half a day doing what this $5 drill attachment can do in a half an hour. I figured it was worth the minimal effort on my part to take some pictures and write something up.

Finally, do not take this wire brush to anything with a finish. Some finishes can handle this brush if you have some finesse and a variable speed drill, but I dare not even mention what those finishes are because you can just as easily strip that finish off, and I don’t want to be responsible for that. So officially, do NOT use ANY steel wire brush (handheld or wheel) on a finished barbell.