Previously I wrote an article on the benefits of adding battle rope training to your workouts. Since then I’ve been practicing what I preach by consistently using my own battle rope and I wanted to briefly touch on subject once more.

First of all, I believe more strongly than before that everyone should add battle ropes sets to their training program. This goes for any type of training; as I believe a rope not only makes for incredible cardiovascular workout, but it also does more than its fair share for endurance and strength as well. I think it’s especially important for folks who are already incorporating cardio into their routine for weight loss to consider replacing (or at least complimenting) the standard routine cardio with a battle rope.

A Battle Ropes, You Say? 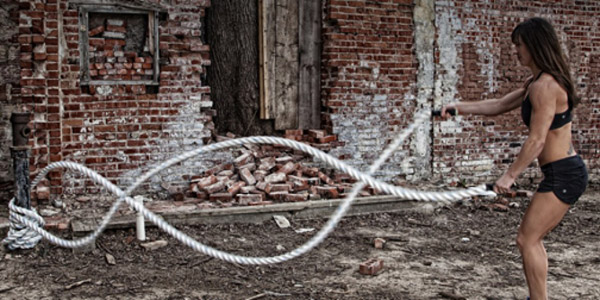 For those unfamiliar with battle ropes, this is pretty much how it goes.

I’m one of those guys who tries to balance my efforts of building muscle with keeping away excess fat. I’m not overweight, but my body wants to be the wrong kind of large by default, and it surely would be if I didn’t actively work to prevent it. So while I lift four, sometimes five days a week, I also do cardio consistently. I have jogged, biked, jumped rope, rock climbed, and I even used to run the boring treadmills for cardio. To me, most of that stuff was boring and ineffective.

Many months ago I discovered the wonderful hell that is a battle rope. I picked up a 2″ thick, 50′ battle rope online and, let me tell you; this thing kicks my ass every single time I pick it up. This thing is the equivalent of sprinting up a hill or running with a prowler. It winds me so quickly and so thoroughly. In hindsight I probably shouldn’t have bought a 50-pound rope right out of the gate, but it’s what I have so it’s what I endure.

Currently my daily cardio routine (done at a completely different time than weight training, of course) consists of battle ropes sets for as long as I can take it, then I do jump rope sets in between. It works out well because jumping rope, while great aerobic exercise, is a walk in the park compared to battle ropes, but still enough to keep my heart rate up.

I haven’t tracked it with a heart rate monitor yet, but I’m quite certain that I am burning an insane amount of calories in a shorter amount of time than I would if I was jogging or on a treadmill.

Before I added the battle rope I used to only jump rope. I’d set a time like 30 minutes and just jump rope as many long sets as I could until 30 minutes was up. Of course I was tired afterwards, but not like how tired I am after a battle rope & jump rope session. I feel it the most in my lungs and heart; much like a long sprint, but I also feel it in my forearms and shoulders a lot, and to a lesser extent in my legs, core, and upper arms.

The point is that I’ve done all the other cardio. No treadmill, eliptical or other gym machine is going to wind you like this. Unless you sprint up hills, swim across bays in storms, or run upstairs with sandbags over your shoulder, I doubt the cardio you’re doing is burning off fat like a battle rope will. Even if you think you are getting a good calorie burning session on a stationary unit you can’t beat the price of a rope; not to mention battle ropes actually builds muscle and endurance as well.

To sum it all up, I’m just trying to spread the word. I’m officially a battle rope fanatic. I truly believe the battle rope is an affordable, ingenious piece of equipment that a lot of people could benefit from. If you’re not using a battle rope yet, get on that.

Hey, where’d you get that battle rope?

You can get battle ropes almost anywhere that sells CrossFit or H.I.I.T. equipment. Rogue sells a battle rope, or Bulldog Rope. Most CrossFit shops offer these, sometimes in varying lengths and weights. Alternatively, Amazon sells a version that comes in even smaller sizes including a very short 16.5′ rope for beginners. I wouldn’t suggest getting anything shorter than 40′ because I think you’ll outgrow it too quickly, but that’s just my opinion.

If you’re super hero strong, you can go for the Rogue Battle Chain. It’s 125 pounds and 45 feet long and I think that would probably give me a heart attack. Kudos to anyone who can whip that around for more than 3 seconds.

The Battle Chain – Good luck with that!