Battle rope workouts? What’s that?! Battle ropes themselves aren’t really new, but they’re kind of a new thing. They were developed by a fellow named John Brookfield. He didn’t call them battle ropes, but actually referred to the activity as battling ropes. He came up with the system for himself originally, but it got out and now we see it everywhere.

So at what point exactly it became a thing? I don’t really know. I just know I hear about battle ropes all the time now. And for good reason! Rope training is an amazing alternative to cardio and a fantastic exercise to supplement a strength training or HIIT routine.

So What is a Battle Rope? 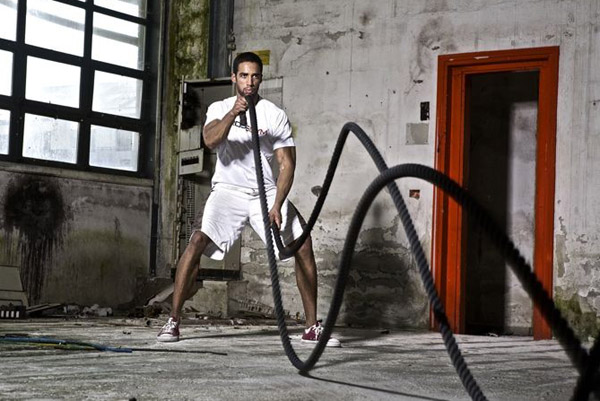 This is battle rope training. Originally it was referred to as battling rope.

If you have never seen a battle rope (and the pictures didn’t give it away), they are massive ropes that are usually about 50′ long and about 2″ thick; weighing in at about 20 pounds (there are other varieties of length, width and weight, of course). They are intended to wrap around some form of anchor like a basketball post, tree trunk, lamp post, whatver. Then you take both ends of the rope, place yourself about 20′ away from the post, and well… whip it around in waves. Sounds lame the way I describe it, but believe me, it’s intense.

Here’s what makes battle rope workouts so amazing. Ropes offer a high intensity workout that targets practically every muscle in your body, but absolutely destroys your arms, back, shoulders, quads, and core. I’d say it’s the equivalent to sprinting for your upper body. Also, the workouts are short. You can be done with your workout in as little as 20 minutes. Sound like a short workout? It’s not. You will definitely know the next day that you worked out, and worked out hard. 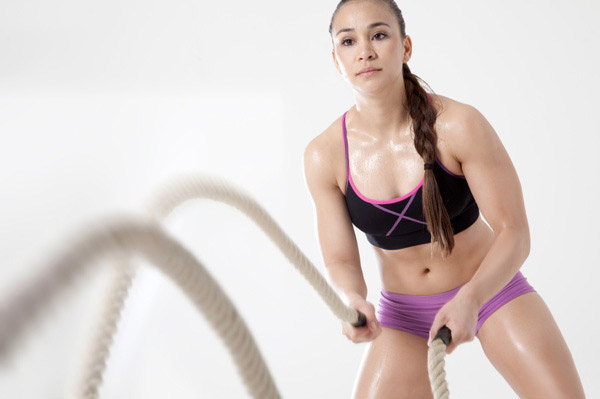 For those of you that use cardio equipment in gyms, or have heart rate monitors that track your calories, you know how slow calories melt away during the standard cardio exercises like jogging and rowing. It can be discouraging to see that after an hour of cardio you burnt no more calories than whats in one of those stupid Starbucks drinks (no coffee drink should have 700 calories.)

Well battle rope training is very much like Crossfit. It’s high intensity training, and it burns a ton of calories. It’s not unusual to burn upwards of 1000 calories per hour doing battle rope workouts (I should say 500 calories per half hour since most of us can’t whip ropes around for an hour). Either way, we both know the treadmill at the gym set to 5 mph is not burning anywhere near that. The treadmill will also never give you any mass, but the rope can.

Need another reason to get training with battle ropes? How about because machine cardio is boring as hell. It’s sooo boring and nobody likes it. How great is a workout that involves watching a television anyway? How focused could you really be? Battle rope workouts are hard! It’s a challenge, and it takes focus, but it is fun. You will be blown away how fast you get your heart rate up. 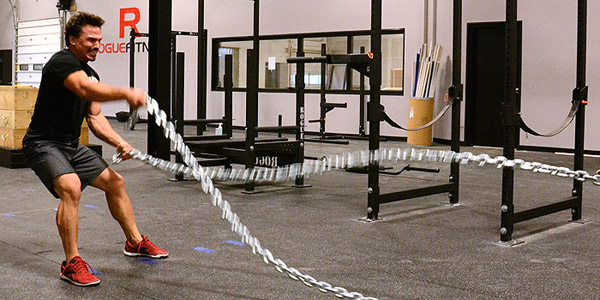 Here’s one way to take it to the next level. Turn rope training into chain training (that’s hard to say).

So ok, it makes for a better cardio workout than the machines. How about for strength and power? Well battle ropes have you covered there too. As previously mentioned, a standard battle rope weighs in at about 20 pounds, sometimes more if longer or thicker. Well you can easily turn that up to 11 by replacing that rope with chains.

Whipping a heavy chain around is strenuous to say the least. The idea is to maintain your maximum speed and force throughout your entire set. You will see strength gains – and in unexpected muscle groups. For instance, your forearms are going to be blasted, as will your shoulders.

I don’t know about you, but I have problems with gains in my shoulders. I have an exclusive shoulder day every week just as I should, but they grow slow. Rope training helps with that. I cannot even begin to explain to you how sore my shoulders were the first few times I ever used a battle rope (and it wasn’t even for very long).

One more thing worth mentioning before I let Joe show you some sample workouts with the ropes. Battling ropes are safe. It’s a low impact exercise that doesn’t require any spotters, safety mechanisms, or rubber flooring. You go for as long as you can then you just stop, or let go. It’s nice that there is a workout this intense that isn’t dangerous in the least.

The video below is great. Joe will show you over 20 variations of battle rope workouts.

So there you have it… battle rope workouts! Grab a rope and try it. Unless you’ve got a problem with being trim and sexy. 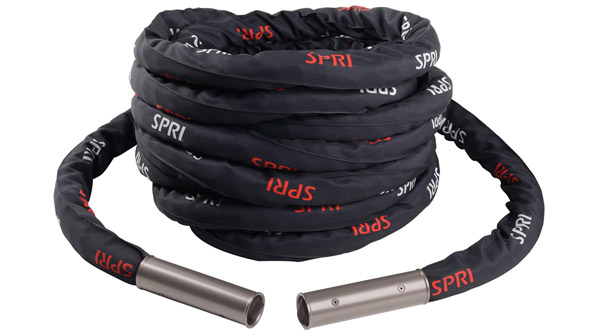