Arm Blaster – Are They Worth the Cash? 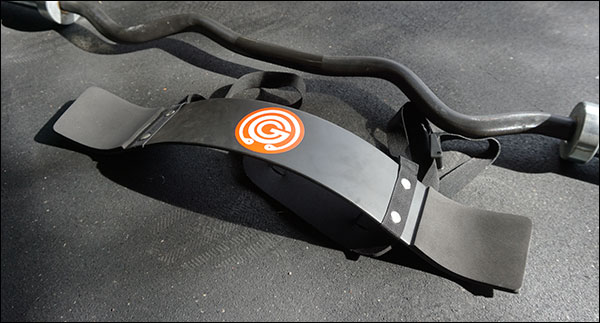 I want to take a look at the Arm Blaster, a strength training accessory that has made quite a comeback as of late.

The Arm Blaster is a piece of curved aluminum about 24″ long and 4″ high that is designed to be worn around the neck when performing bicep curls. The Blaster keeps your arms in a fixed position against your trunk, with the claim being that this promotes proper form while also isolating the biceps. The idea, of course, is to “maximize the strength-building benefits of bicep curls”, and to give you that massive pump.

Arm Blasters have been around for over 50 years, but I’m of the opinion that they had fallen out of favor for some time, and only returned as a popular training accessory when Rogue Fitness released their version of the Arm Blaster. I mean they’ve always been out there, but Rogue definitely helped to make them a thing again. 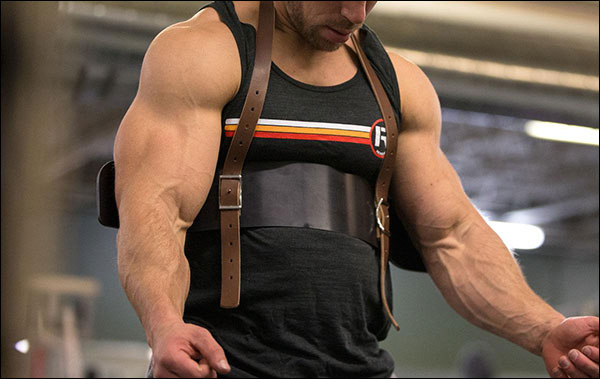 Rogue kicked it up a notch on their versions of the Arm Blaster by adding optional leather straps and offering different finishes, but it’s functionally no different than any of them out there.

So Does the Arm Blaster Work?

The Arm Blaster does work. It does exactly what it claims to do. The Arm Blaster locks your arms at your sides, and it does indeed isolate the biceps. It also prohibits (at least reduces) your ability to cheat your curls.

Uncomfortable how? Well it doesn’t necessarily feel good on the triceps unless you maybe have no triceps. I mean I am no Sergio Oliva, but my arms certainly aren’t perfect cylinders that conform to the shape of the Blaster.

Given enough weight, it’s also uncomfortable on the lower back because at no point during a set with the Arm Blaster is the weight not out in front of you. You are physically unable to get your upper arms back far enough to allow for the weight to settle around your center of gravity with the Blaster on. Obviously this is less of an issue at low weight, but do you want a device that feels awkward to use at the heavier weights? I didn’t anyway.

Some people also don’t like the feel of it against their stomach and rib cage, but I found that to be the smallest problem of the three.

In the interest of fairness, not everyone experiences these issues with the Arm Blaster. Your mileage may vary; as they say.

Alternatives to the Arm Blaster

Two big bicep movements come to mind right off when I think of bicep isolation exercises, and first is the preacher curl.

The preacher curl is performed on a special bench; or preacher bench. A tilted pad is used to lock your arms into a fixed position; much like an Arm Blaster does. The starting position is a little different in that your arms are more forward and less at your sides, but the biceps are still put through the same limited range motion, and all of the same muscles are being recruited. Like the Arm Blaster, curls on a preacher bench can be performed with a curl bar, straight bar, or dumbbells. 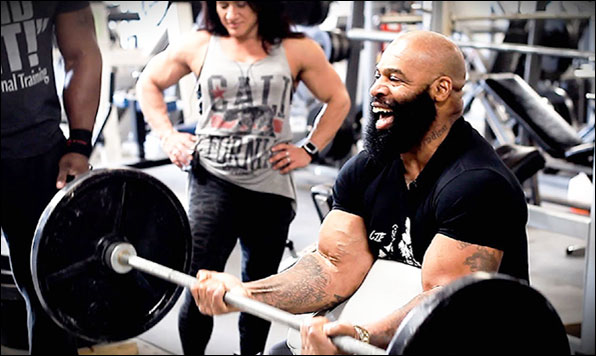 I really find that a lot more weight can be comfortably curled on a preacher bench than with an Arm Blaster. The preacher bench is way more comfortable on the triceps. The full-sized, cushioned pad versus a curved metal plate that digs into the back of the arm in not one but two places goes a long way in making heavy loads comfortable. 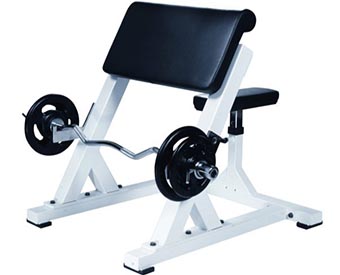 Additionally, balance isn’t a factor when doing preacher curls (be it standing or seated), and there is no strain on the lower back – which I find happens at even moderately heavy loads when using the Arm Blaster. Remember that the whole point is to isolate the biceps, right? There is zero benefit from having to stabilize and balance your entire trunk and strain your lower back when trying to isolate. If you want all that then just get yourself a Bosu Ball and go curl on that.

The second alternative is seated incline dumbbell curls. By sitting in an incline bench and allowing your arms to hang completely perpendicular to the ground, your arms are more or less locked into position because of both gravity, and the fact that your humerus is placed behind your trunk. Not only are you getting just about the same isolation and pump as you would with the Arm Blaster, your range of motion is actually increased. Not only that, incline curls requires neither a preacher bench or an Arm Blaster accessory. 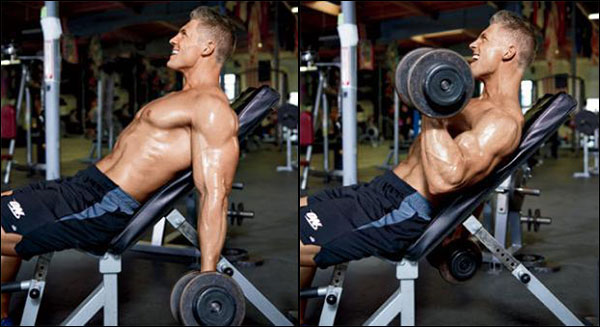 My Own Personal Opinion on the Arm Blaster

If I’m being honest, I have to admit that I don’t really care for the Arm Blaster. I bought one, so I definitely tried to make it work, but the fact of the matter is that I found it uncomfortable on both the back of my arms (where my arms are resting against the device), and my lower back when I try to curl heavy. The things I find my body doing in an effort to conform to the positioning this device puts me in seemed counterproductive to a good arm slaying.

Since the Arm Blasters seems popular these days I got on Instagram to ask some followers what they thought about it. I wanted to make sure my analysis of it wasn’t totally off base or too different from the norm. Below is that post. I suggest you read some of those comments if you’re considering buying an Arm Blaster (and please follow while you’re at it!)

Nobody who uses my gym seems overly fond of the device and after a couple tries by most of us, it pretty much hasn’t been touched again. I’ll leave it in my gym in case someone new comes along who wants to use it, but I’m guessing this thing will just collect dust.

Whatever, John! I Want an Arm Blaster!

So you want one anyway? Knock yourself out. For a premium Arm Blaster, try Rogue’s Arm Blaster. To get one on the cheapo, check out Amazon – there are a crap load of them listed there. Yes, they’re all pretty much exactly the same thing. I truly hope you like it more than I did. Seriously! Suns out… 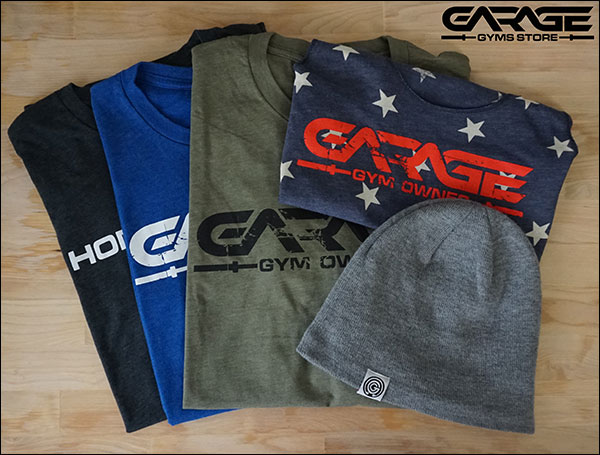